You can taste all sorts of noodles from across Asia right here in Dubai. While by no means an exhaustive list, here are some of the most memorable noodles to have crossed our chopsticks in the city.

These Chinese noodles from the Yunnan province are strung on a popular legend of a devoted wife and her studious husband*. The wife would cross a bridge over to a secluded island in the middle of lake, where her beloved had isolated himself to focus on his civil services’ studies. To save her beloved from the unthinkable horror of noodles gone cold and soggy during the journey, she devised a novel way of deconstructing the dish and assembling it with hot broth only after she reached her husband.

So how do you keep your broth BOILING hot until it hits the table? Cover it with a thin film of rendered fat to lock the heat below. All the ingredients to be added are thinly sliced and cook in seconds once added to the hot broth – think of it as a hot-pot-for-one.

* Thanks to our trusted Chinese food friend Xini Wei for sharing this legend with us!

Lagman is a popular Central Asian dish with wheat noodles that are pulled fresh when ordered. They develop a lovely chewy texture as the dough is pulled and folded over and over into strands before being cooked in a lamb or beef broth.

Once cooked the rustic noodles are tossed into a savoury sauce with sautéed meat and peppers, the flavour somewhat halfway between Persian and Chinese. A little secret—we always order naan or buttery katlama on the side to rip and dip into the goodness at the bottom of the bowl.

You can’t go wrong with UZB Avenue in Barsha or Star Uzbegim in Bur Dubai.

The grandfather of Uyghur lagman is the Chinese lamian which travelled down the Silk Road with Chinese traders.

Lamian is the signature dish at Muslim Chinese restaurants from Lanzhou and its clean, minimalist flavour belies the years of mastery and skill required to hand-pull these noodles in the blink of an eye. While there are a handful of restaurants in Dubai serving Lamian, the only one where you see the magic happen right before your eyes is featured on our upcoming #Sufra tour in International City, For the Love of Noodles.

Xiao Mian is the Yin to Lamian’s Yang. Where Lamian is subtle and soothing, Xiao Mian is bold and in-your-face. It knocks your socks off with its numbing spiciness and rising heat (you can adjust the spice level to your preference).

Served without a broth, the noodles come folded and draped, hiding the mix of sauces and flavourings below. It must be mixed completely just before eating to ensure that every bite delivers a flavourful punch. Jing Lanh, Sichuan native and our co-guide on #Sufra: For the Love of Noodles, takes us for the Xiao Mian that makes her reminisce of home.

Bún Cha briefly outshone the more familiar pho when the late Anthony Bourdain took then-President Obama out for a bowl on his visit to Vietnam in 2016. Served two ways from the north and south of the country at Vietnamese Foodies Restaurant in JLT(and now Downtown Dubai), Bún Cha rice noodles are dressed in an outrageously addictive nuac cham (fish sauce). While we’re loathe to pick sides, we can’t help but love the northern style of Bún Cha a little bit more, with its serving of crispy chicken spring rolls, handmade duck sausages and juicy chicken satay.

Learn more about the Lily, the owner of Vietnamese Foodies, and her Bún Cha in our podcast episode.

While most noodles seem to be wheat or rice based, ‘glass noodles’ break the noodle norm by being made from vegetable starch. A case in point is Korean japchae where brownish translucent noodles made from sweet potato are dressed with veggies, sesame seeds and some form of sweet-salty-umami sauce. Two of our tried and tested spots for japchae and other Korean treats are Hyu Korean in JLT and Seoul Gardenin Karama.

Another Korean favourite is buckwheat noodles immersed in a cold broth of beef stock and pear juice. Fantastically refreshing on a humid day in Dubai, this noodle bowl is usually topped off with spicy gochujang paste and half a boiled egg.

Typically the egg is eaten first as it’s believed to coat the digestive system and protect it from the spicy gochujang. You then mix the rest up and begin to pull and eat, but beware! Cutting the long noodles before eating them is said to reduce one’s lifespan, so bring your slurping A-game!

The dish has even made its way across the continent to the ‘Stans’ where it’s known as kuksi. Markedly different in flavour and made with wheat noodles, it was made by exiled Korean migrants (the Koryo-Saram community, who brought farming to the nomadic shepherding communities of the Central Asian steppes) with local ingredients before becoming popular with the locals.

Try the original Korean version of the dish at Hyu Korean and the Koryo-Saram variant at UZB Avenue in Barsha. 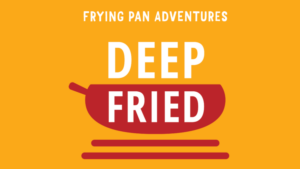